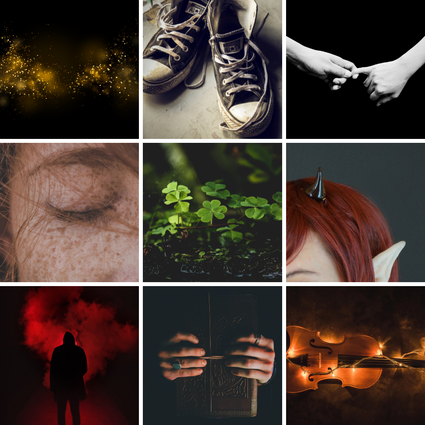 SHAN-ROCKED! - Middle Grade Fantasy
​
​All she needed was a stroke of luck.

Forced to volunteer at a renaissance fair, Shannon Wright cannot fathom how life could get any worse. If it wasn’t for her Irish-obsessed mother, Shannon could return to practicing her violin to be the next Lindsey Stirling and her dad wouldn’t have moved out. However, her world gets rocked when she gets captured by Finn, a leprechaun. Well, a leprechaun-in-training that is.

In Finn’s excitement, his mixed-up magic accidently binds their souls together. As such, Finn is required to grant Shannon three wishes before he can continue his pursuit to become a real leprechaun and reunite with the rest of his fae family. Yet, Shannon quickly learns that Finn’s magic is anything but lucky.

Between glitter bombs and making her wreak of garlic, Shannon understands that she must be extra careful when making her wishes. And of course, there are restricting rules so much so she can’t even tell anyone about Finn’s existence. Literally. However, Shannon discovers her wish list is the least of her worries.

Not only is she soulbound to a wanna-be leprechaun, Shannon learns that another member of the fae world has attached itself to her family—a clurichaun. This menacing trickster is a shape-shifting dark fae that intends on siphoning all the magic from the leprechauns in order to control Shannon’s small rural town. In order to stop this tyrant, Shannon must work together with Finn to trap this dark fae so they can both reverse the curse placed upon them. If she doesn’t, not only will Finn lose his family, she’ll lose the little of what’s left of hers.